Brian Mogren: Being Who He is and Being That Well 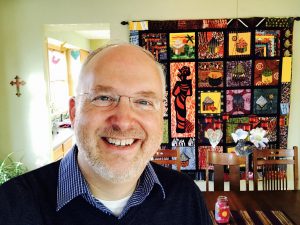 “Be who you are and be that well.” — St. Francis de Sales Tweet

It’s been a decade since Brian Mogren quit a long-held job at Target Stores to heed the call of St. Francis de Sales to “Be Who You are and Be That Well.” In that time, what Mogren has been is the provider of shelter to the temporarily homeless, the purveyor of a quiet space for spiritual seekers and a persistent, insistent, consistent friend of the Visitation Sisters, his neighbors in North Minneapolis. His work won him the Virginia McKnight Binger Award in Human Service from the esteemed McKnight Foundation, given to those who “give their time to improve the lives of people in their communities.” He’s done that all right and along the way served as an unofficial counselor, coordinator, gardener, director and caretaker for those who use his home on Emerson Avenue North. “This opened up a world of possibility for me and my life,” Mogren writes on his website, “that I could not have imagined: bringing my unique gifts, creativity and connections to contribute to the transformation of North Minneapolis.”

A Call to the Northside 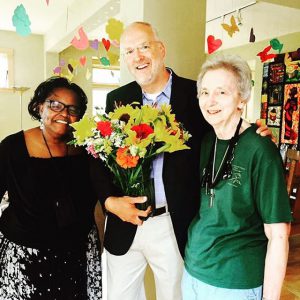 Mogren’s transformation began, in part, when he met the Sisters. Since 2008, the Sisters have leased his home (The St. Jane House) for retreats to women seeking empowerment, students wanting enlightenment and mothers shedding resentment. A grass-roots group, From Death to Life, counts the St. Jane House as its home. Its founder is Mary Johnson, a mother who sought out, and forgave, the man who killed her only son. Mogren serves on the board.

“This is what it’s all about – connecting across difference and discovering our common humanity.” — Brian Mogren

His journey owes something to an epiphany moment years ago when he was leaving a parish council meeting at St. Philips Catholic Church on 26th and Bryant Ave. N.   He noticed a woman frantically trying to pick up papers strewn about the street; she’d left them on top of her car as she pulled away. Now she was scurrying to pick up the papers and sheet music and Mogren gave her a hand. They walked back to the church arm in arm. The moon was out. The evening was quiet. And Mogren felt at peace. Suddenly a car with dark-tinted windows pulled alongside, rap music pounding as the back window began to roll down. Mogren’s moment of bliss turned to terror, fearing they could get hustled, hassled or hurt. Just then, a teenage boy stuck his head out the window, smiled and said, “Hi, Miss Muggs.” This was a teenager talking to a 70-year-old Irish Catholic. 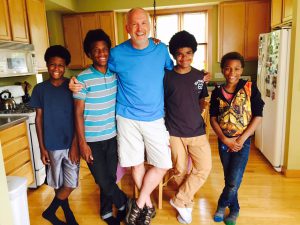 “They had love and affinity for one another,” Mogren recalls. “Later I wept. I thought, ‘Oh, my Gosh.’ This is what it’s all about – connecting across difference and discovering our common humanity. I felt called to move to the Northside.” He did, building what would become the St. Jane House in 2003. .He moved in and became an official North Minneapolis resident, still holding on to his creative job at Target. He decided to quit, after 24 1/2 years, following another epiphany experience – this time while listening to a tape of students’ spoken-word poetry.

“[Brian] has mentored a few young people who look on him as a role model and friend. He loves North Minneapolis and it shows.” – Sr. Karen Mohan,VHM

“I remember hearing the urgency in their voices,” he says, “and in that moment my heart was burning. I needed to do what I could to ease the pain and provide a path for those who needed it. I wanted to make a difference.” A big part of the difference began when the Sisters and Mogren got together with the St. Jane House. He had the space. They had the plans. They’d bring the people. He’d be the director. 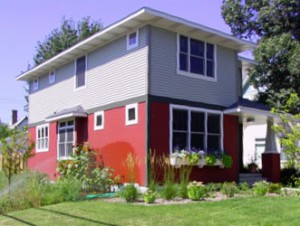 St. Jane House: A Place of Rest and Delight

In the years that followed, the St. Jane house has provided guest rooms for overnight visitors, hosted a weekly centering prayer group, offered retreats for healing and support groups and served as home base for students – high school and college – seeking an “immersion experience” in the flow of neighborhood life.

“I feel loved and celebrated by the Sisters….They embody the God of my understanding, and they define the notion of inclusion. I am able to give to others what I receive from them.”

It doesn’t surprise Sister Karen Mohan that Mogren can handle such varied groups with finesse, grace and hospitality. It was modeled by his parents, Jerry and Arlene, who were quick to welcome others to the Molgren family. He’s had a lot of practice. “When we became ‘family and friends’ with Brian,” she recalls, “we inherited all his brothers – 11 brothers and no sisters. When our community went to his mom’s home for one of the family get-together suppers, we were welcomed by a big sign outside on the lawn. “’WELCOME SISTERS. WE ALWAYS WANTED SISTERS. And now we have them. YOU.’ We love the Mogren boys and we loved Arlene, their mother. After her funeral a few years ago, the 10 living brothers all carried her casket singing, ‘She’s ain’t heavy. She’s our mother.’ There wasn’t a dry eye around.”

Loved and Celebrated by the Sisters 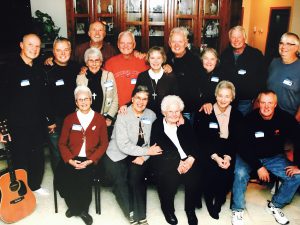 Family and Friends: The Mogren Brothers, Mother, and Visitation Sisters

Mogren remembers first meeting the Sisters at St. Philips where he started attending mass because of his respect for Father Greg Tolaas. He met them there, but he really got to know them after he moved to North Minneapolis. “I feel loved and celebrated by the Sisters,” Mogren says, “ever since I met them. It’s wonderful to be in the presence of their non-judgmental, joyful spirit. They have helped me to be gentle with myself and that helps me to be gentle with others. They embody the God of my understanding, and they define the notion of inclusion.

“I am able to give to others what I receive from them. They have entrusted me with their platform and space.” He’s been a fine defender and caretaker of that Salesian spirituality, in the opinion of Jeff Pearson, a long-time friend and benefactor of the Sisters. “Brian can weather the storms,” Pearson says. “If it doesn’t work one way, he’ll figure out a different way. He’s got the kind of compassion that keeps him coming back.” 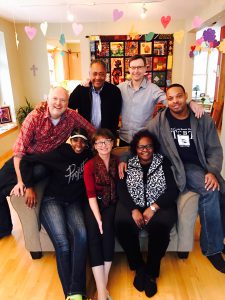 Sister Karen notes that Mogren, now 51 years old, is something of a Renaissance man, who’s an artist, a graphic designer, a photographer and a fun-loving guy with a sense of humor. Mogren, who lives in the basement of the St, Jane House, prefers to think of it as “the garden level.” “Brian was inspired to begin the Alafia Foundation to encourage leaders from the neighborhood,” Mohan says. “He has mentored a few young people who look on him as a role model and friend. He loves North Minneapolis and it shows.” Mogren would smile at that description. He’s a man who loves where he is: in his city, in his heart, in his life.   “I don’t see any other than the life I’m living,” he says. “I get to be who I am and to be that well.” That’s why the welcome mat is out at the St. Jane House.

This is a beautiful and accurate post about a wonderful man.

God has blessed many through the Sisters and through Brian

This story describes the Brian I know and love. He is true to himself. (He also introduced many of us to Fr. Richard Rohr.) Whenever I have been at St. Jane House, you know something good is happening. Thanks for being you, Brian. It is good to have the Sisters and Brian lighting their lights in North Minneapolis! Thank you Sisters! I call you all friends.

I am smiling and proclaiming the ways of God’s Holy Spirit who found a path for Brian and the Sisters to live our callings, individually and as one family ! Thanks, Dave, for this beautiful and accurate tribute !!

What a nice article! Brian is a wonderful host! I always feel welcome when I visit the St. Jane House. Thanks Brian for following your calling.