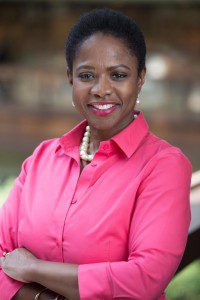 Sondra Samuels is not a shrinking violet who wilts under pressure or withers from conflict or criticism.

That’s part of the territory when you’re the CEO of the Northside Achievement Zone (NAZ), a partnership of community organizations and schools with a jaw-tightening task:  to prepare 2,300 children in a 18 by 13-block square of North Minneapolis to graduate from high school and go on to college.

“Sondra is an astute educator, a caring mom and wife and community advocate. She is a doer.  She brings pride to the Northside and our achievements on behalf of future generations.” — Sr. Suzanne

If this job isn’t enough, add in her husband’s.  Don Samuels was the 5th ward councilman and is now a member of the Minneapolis School Board.  Sometimes the pace can be relentless, the criticism approaches nastiness and the goals can appear hopeless.

These are times when Samuels, the girl who grew up in Newark, appreciates the Sisters who live in Minneapolis. They share a belief in society where character, conscience and courage replace color, class and creed to measure a person’s worth.

“I knew these Sisters were different.  When I asked them what their day was like, they told me when the doorbell rings, ‘We know it’s Jesus at the door.’  And they really mean it.” — Sondra

Samuels remembers her first meeting with the Sisters, at a time when she and Don were grieving yet another gunshot death of a Northside teenager and confronting what they felt was unfair criticism from community loudmouths. 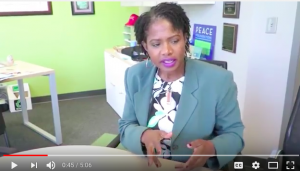 “I remember Sister Suzanne (Homeyer) met me at the door,” Samuels said.  “I fell in with a limp body and I think I shed a bucket of tears.  We went into the Chapel.  We prayed.  And I felt comforted and embraced when I left that house.”

Homeyer remembers that day, too.  “She particularly asked for prayers for her husband and neighborhood concerns, too,” she said.  “There were tears, sharing, laughter, tissues and hugs.  It was the way we meet so many of our neighbors and we both kept our promises.  Sondra has come back to visit with, and without, her family.”

Kind of amazing for someone who isn’t even Catholic.

“That doesn’t matter,” Samuels said. “I knew these Sisters were different.  When I asked them what their day was like, they told me when the doorbell rings, ‘We know it’s Jesus at the door.’  And they really mean it.”

The Sisters feel their support of Samuels is being repaid in full by the work she is is doing in their backyard through NAZ, which got its start with a $26 million federal grant over five years.  That funding is gone now and Samuels is working to raise $11 million a year from the coffers of the state, the city and corporate and private charities.

Part of her pitch she already outlined in an Op-Ed column published in June in the Minneapolis Star Tribune:

“We also recognized that schools can’t do it alone so we surround students with a team that provides everything from extra academic opportunities, parent education and early childhood services to behavioral health counseling, housing and career support.  In partner schools where the supports are most layered for NAZ students, they are doing significantly better than their peers in reading.” 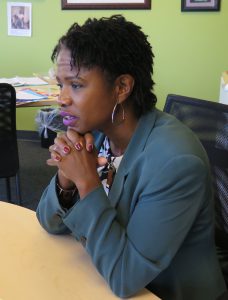 Samuels gets animated and excited when she describes a recent 12-week program for parents on the resources, skills, tools and techniques they’ll need to better raise their infant children.  “We’re getting Dads to show up for this course,” she said, “and one of the women talked about learning that she doesn’t have to be ‘a screaming mother,’ yelling at her child.”

Samuels is finely attuned to the complexity of life for minorities in America, dealing with the realities of discrimination and prejudice while avoiding the passiveness and pessimism that comes from playing “the victim” role.

“I think Black Lives Matter, and the protests, cause me to say, ’They finally see us.’ They know we’re here,” Samuels said.  “And our problems are the problems of all poor people and we do have to be working for all people.

”But to the people of color, I say, ‘They aren’t coming to save us.  We determine how we’ll do.  I am not bent over.  We can help each other but you’ve got to show up and do your part.”

Will Wallace, who knows the Sisters and Samuels, uses the same message in his work with Emerge, trying to prod young brothers (and sisters) off the streets, out of gangs, into school and onto jobs.  “Sondra Samuels,” he said, “is the real deal.  She’s got the best interests of the Northside young people in her heart.”

The Sisters echo that sentiment, having watched Samuels in action – in good times and bad.   “Sondra is an astute educator, a caring mom and wife and community advocate,” Sister Homeyer said.  “She is a doer.  She brings pride to the Northside and our achievements on behalf of future generations.”

Samuels and the Sisters: a neighborhood partnership that gives hope to that future.

I thank you, Dave, for throwing a spotlight on a very deserving woman. I think the Light she shines is Christ. SK2

Wonderful article! We are inspired by the work that Sondra is doing at the Northside Achievement Zone! We have invited Sondra to speak about the intergenerational work she and parent leaders are doing to reduce poverty on the Northside at St. Patrick’s Annual Fall Forum, Bridging the Divide on Tuesday, October 11 from 6-8 p.m. It’s free and open to the community! We will also have a community meal! Please join us and invite friends and neighbors! You can register at St. Patrick’s website at http://www.stpatrick-edina.org.