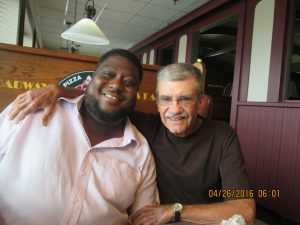 Will Wallace and Dave Nimmer

A NOTE OF APPECIATION: Dave Nimmer has traveled with us the 27 year journey of the Visitation Monastery of Minneapolis. His unconditional love and presence to our community from Day #1 moved us to honor him with our Cross of Affiliation. No one knows more profoundly than Dave the essence of the relationships we have nurtured and been nurtured by over the years. We so appreciate that in his retirement years, he continues to share his considerable literary gifts with us!

Welcome to Blog # 7! Sr. Mary Frances and the Visitation Sisters of North Minneapolis

The relationship between Will Wallace and the Sisters of the Visitation Monastery of North Minneapolis is the stuff of a movie script: Former gang member meets up with a group of nuns and over the years they form a friendship, develop a bond and share a dream.

They’ve known each other for 15 years and, in that time, the Sisters have helped Will get a house, support his family, survive the setbacks, burnish his skills and nurture his soul. And Wallace has been there for the Sisters, talking to their supporters, distributing their holiday gifts and even providing bodies to shovel their walk.

“No one does a better job in talking with [the Visitation Students] about the realities of life over here,” says Sister Mary Frances Reis.   “He can be spellbinding. He tells the truth and talks from his heart. He is not afraid to cry.”

It’s no exaggeration to call the relationship one based on trust, respect and, yes, love. “I do love the Sisters,” Wallace says.   “I mean, they talk about being respectful, being peaceful, being useful. That’s what they show me since the very beginning. When I’ve needed ‘em, they’ve been there.”

It was Christmas Day a few years ago when he needed comfort and consolation after his brother was shot and killed in Clarksdale, Mississippi. He went to the Sisters early in the morning, filled with grief and stoked with rage.   He lay on the floor, shed his tears, told the story and left with a little peace.

Wallace, a former Gangster Disciple who caught a break from a judge, got a high school degree from an alternative school and managed two years at The University of St. Thomas before succumbing to the pressures of a full-time job and four courses a semester.

The Sisters have celebrated his perseverance and invited him to talk with seniors from Visitation High School who spend a week with them, an immersion experience in life on the Northside. “No one does a better job in talking with them about the realities of life over here,” says Sister Mary Frances Reis.   “He can be spellbinding. He tells the truth and talks from his heart. He is not afraid to cry.”

“I do love the Sisters,” Wallace says.   “I mean, they talk about being respectful, being peaceful, being useful. That’s what they show me since the very beginning. When I’ve needed ‘em, they’ve been there.”

Will’s ability to relate to others was obvious at The City, where he got his high school diploma and then worked, starting as a daycare supervisor. “To everyone’s surprise,” wrote Tom Helgeson, a friend and supervisor, “Will thrived as a daycare employee. Later he was hired as the full-time supervisor of The City’s job training program.. Will is doing an outstanding job.”

Those remarks helped Wallace get into the University of St. Thomas and two years there helped him land a job with Emerge, a program reaching out to gang members, offering them training and helping them find jobs – and stay with those jobs. Will Wallace was available for “his guys” to talk with 24/7. His cell phone was always busy.

And it still is, in his job with GAP (Guadalupe Alternative Programs) working with young bothers in the Minneapolis Public Schools, grades one through eight. In effect, Wallace is a mentor, a (surrogate) father, a confessor and a counselor. His goal is to keep them in school, into their classes and out of trouble.

One of the messages is straight from his interaction with the Sisters (and their patron saint Francis de Sales). “’Nothing from violence. Do everything through love. I tell them. I really do. It’s what the Sisters preach and what I try to practice. Look, I know first-hand what violence does and how it can take families apart. I am not afraid to offer love – and a little patience and understanding.”

Wallace has developed that “softer side” with his wife, children and grandchildren. He can lay down the law, all right, but he can also ease up on the judgment. He figures he’s got the tools to be a new-generation leader in North Minneapolis and one day run his own program. The Sisters helped nurture that dream. 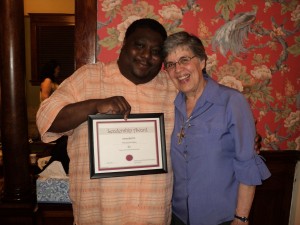 As long as he’s dreaming, Will would love to have his own place on a small lake where he can kick back and simply go fishing. He’s an artist with a rod and reel and something of a “fish whisperer” in a boat: “C’mon girl, come to Papa.” On a lake he exchanges problems and quarrels for peace and quiet.

He’d like to pass some of that on to his young charges in school, whose lives are often chaotic and contentious. Wallace tells them that life can be better – and bigger – if they can see a little further down the track.

“A lot of these kids have only known the north neighborhood,” Wallace says. “They haven’t been across the river, where Lake Street turns into Marshall Avenue. They’ve never seen a private college. They’ve never been able to sit in a boat on a quiet summer day and fish crappies, tell stories and laugh at each other.”

Will Wallace HAS crossed the river to attend a private college. While he hasn’t discovered the Promised Land, he’s blazed a promising path for others to follow.

In his June 3 guest
blog, Dave Nimmer wrote beautifully and powerfully about Will Wallace and his relationship with the sisters of Visitation Monastery.