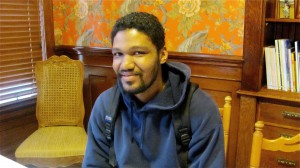 Wazeer Brown, and his brother Emmanuel, are the first youngsters the Visitation Sisters “met” after they decided to locate their monastery in North Minneapolis in 1989.

The two boys, about three and four years old, were standing on the street corner at 16th and Fremont as the Sisters were driving by.  “Here are these two kids waving at us like crazy,” recalls Mary Frances Reis.  “They had a big smile on their faces.  We couldn’t help but noticing their pure joy and excitement.”

In fact, the brothers got so close to the Sisters they had to start a special time – Windsock –  for neighborhood children to come by the Fremont house.  And come they did – for time, treats and attention.

“The Windsock time was really good for me,” Brown recalls.  “It was different from the rest of my life.  It was cheerful and stress free.  I didn’t find that at home or on the streets.  The Sisters were just there for me and brought peace into my life.”

Wazeer and Emmanuel brought their presence into the sisters’ lives, sometimes sitting on the retaining wall in front of the Fremont house.  When they felt it was needed, they’d offer a little advice to  prospective visitors:  “You can’t go in now because the Sisters are prayin’.”

“I’d tell all who wanted to better themselves and change their lives,” he says, “they ought to get to know these women (the Sisters).  They shaped who I am as a person, the person I wanted to be.  I think they kind of put the spirit of the Lord in my heart.” –Wazeer

The Sisters have prayed for Wazeer since those Windsock days two decades ago. Over those years, they’ve read to him, found a mentor for him, promoted a scholarship for him and stood by him through the speed bumps, potholes and sharp curves along his way.

Today, at the age of 29, Wazeer is studying to get his GED diploma, helping raise his two daughters, Destiny, 9 and Serenity,5, holding a full-time job at Walmart and staying in touch with the friends who helped him get this far, including the Sisters.

“What I’m really impressed with,” says Mary Margaret McKenzie, “is how much energy and enthusiasm he’s putting into getting that GED.  A while back, he told me, ‘I’m getting fractions.’  He is actually into his mathematics and, yes, he’s understanding fractions for the first time.  I think that is remarkable.”

McKenzie says she remembers years ago when she helped him and Emmanuel work on a science project to make and inflate a hot-air balloon.  “I don’t recall exactly how that turned out but I do recall thinking that Wazeer was really smart.  You only have to show him or tell him once, and he gets it.”

He “got it” about the importance of going back to school, this time at the Adult Education Center in Minneapolis.  “I think I just realized it’s time,” Brown says.  “My mind is ready for it.”  Once he gets the GED, Brown says he might think about going to a two-year or community college, to help him land a job that makes him joyful and useful.

He already knows how to work hard, according to Jeff Pearson, who, along with his wife Maryann, has been long-time friend and supporter of the Sisters.  They enlisted Pearson to be kind of a mentor/father figure for Wazeer.

“I used to have him come over to my house on Saturday mornings and we’d work in the yard,” says Pearson.   “He hadn’t done a lot of yard work but, I tell you what, he worked hard.  You know, I feel I have a life-long friendship with him.”

The Sisters feel the same way and they haven’t hesitated to call on him to do a favor or two, like talking to a group of seniors at Visitation High School who are spending a week at the monastery, getting immersed in life on the North Side.

“He got up in front of these young women,” says Mary Margaret, “and talked confidently about the value of being grounded when they go away from home to college.  His talk, and his message, were really quite wonderful.”

Wazeer got up in front of another group at his grandmother’s funeral, to talk about who she was, what she did and how she lived.  He has developed this kind of presence in his life and the Sisters have been there to nurture it and, now, to feel it.

Wazaeer in Arabic means “minister.”  Brown is not given to preaching but he’s accumulated enough wisdom for a homily: Change is inevitable.  Get used to it.  Being positive is always a key.  Keep busy in life and work on being a better “you.”  And one more thing.

“I’d tell all who wanted to better themselves and change their lives,” he says, “they ought to get to know these women (the Sisters).  They shaped who I am as a person, the person I wanted to be.  I think they kind of put the spirit of the Lord in my heart.”