Linda Goynes: Our sister and friend* 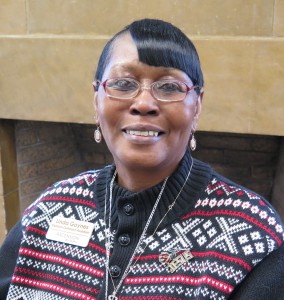 Linda Goynes* is a colorful, consistent and continuous thread in the life fabric of the Visitation Sisters of North Minneapolis. For 12 years she was their next door neighbor. Today she proudly wears their Cross of Affiliation, in effect making her an honorary sister.

Over the years, Linda has eaten at their table, shared in their prayers, joined their church (Ascension), cleaned their house, packed their gift baskets and greeted their guests.

In her 63 years, Linda Goynes has suffered enough reversals to relish the recoveries, weathered enough storms to enjoy the sunshine and survived the trials to appreciate the triumphs. So it’s probably not surprising when asked how she’s doing, her answer has always been the same, whether it’s Tuesday or Friday, January or June. “I am blessed,” she says, with a smile on her face.

“It was such a joy to get the Cross of Affiliation from the Sisters. To me it represents the face of the nuns and the work they are doing. I feel what I am doing is taking their spirit out to the world.”-– Linda Goynes

Her journey includes some rough and rocky travelling. She married her first husband in 1984 and they had three children. Two years later she discovered her husband abused the oldest daughter. He was arrested and eventually sent to prison. Linda felt she was partly responsible for her daughter’s abuse and turned to crack cocaine.

It didn’t take long for the drug to control her life and cause a heart attack. She quit – cold turkey. She was clean and sober for six to seven months, until she began getting threatening letters from her now ex-husband, still in prison. She turned again to the cocaine and in 1990 suffered a second heart attack.

This time she lapsed into a three-month coma and doctors warned continued drug use would kill her. She prayed to God to restore her health, promising she would devote her life to serving Him. She recovered. In 1996, she met Robert White, who would become her second husband. They moved next door to the Sisters on Girard Avenue and continued their life together.

Linda stayed clean but Robert was using, and occasionally, selling drugs. “You know,” she said, “he was a good man but he just couldn’t stay away from heroin. He was using until his last days on earth.” (Robert died in 2015). 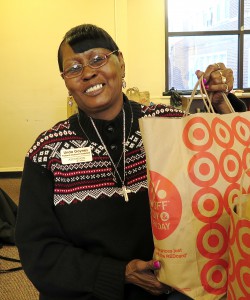 In service: Linda working at the Church of the Ascension Food shelf

“I never knew what was going to happen. One day I would be on the ground in handcuffs after a police raid. And another we’d be robbed by somebody looking for the drug stash or the money. But I always had the Sisters to talk to, and I never felt alone.”

Ironically, Robert also loved the Sisters. He shoveled their walk in the winter, went to some of their neighborhood meetings and even put up their Christmas tree from year to year. But the chaos from his heroin habit eventually got too much for Goynes and she moved out of the house in 2008, to an apartment on Plymouth Avenue.

“Linda is one of the most courageous women I know,” says Sister Katherine Mullin. “She knew she had to leave Robert after all the years of his heavy addiction. She made her decision, found an apartment and kept it together. And then one day (with help from the Sisters) she quietly moved out. But in the years that followed, she also took him to the hospital for his cancer treatments.”

“The Salesian spirit has truly penetrated her heart. If we ever needed help with some event, some celebration some project, Linda has been there.”  — S. Katherine Mullin

In 2010, she joined Ascension Church and became a pastor outreach assistant, organizing committee luncheons, setting up for funerals, arranging the food shelf, changing the candles and opening the church.

A few months ago Linda was dealing with a lung problem, making it difficult for her to take long, deep breaths. But she was at the Monday night Salesian gathering, sitting at the table, eating with the others, picking up the trash and staying for the night prayer.

On my way out, I asked her how she was doing. She said she’d be glad to get home and on the inhalation machine that delivered soothing vapor to her lungs. Then she smiled. “You know,” she said, as if to dispel any complaint, “I am still blessed.”

Yes, Linda, we know. And so are those of us who are to be counted among your friends.

Linda, How wonderful that you now have the Cross of Affiliation. You are a worker in the Field Hospital (Pope Francis).

You use your energy to serve others in very tangible ways. May God continue to bless you, as you become the best you (Francis De Sales).

Linda, You are strong in so many ways. I learn from your fortitude and faith.

Dave, No one could have done a better job; your writing so vividly depicts the life of the the person or of the issue you write about. Even if I didn’t know Linda, after reading your story of her, I would feel a closeness and inspired. God bless you both!