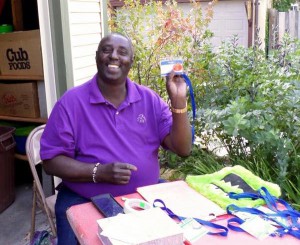 Eddie Brown first met the Visitation sisters some 20 years ago when he was at Turning Point, a north side residential treatment center, trying to shake the addictions and afflictions that had plagued his life.

“The [sisters] have taught me something about loving, sharing, caring and giving back. I know I can always call them….I hope they know I will deny them nothing.” — Eddie Brown

He’d come to the Fremont house to borrow a shovel, which he later returned. But he kept the nuns as his lifelong gift and they have celebrated the good times with him and supported him through the bad.

“Once I walked across that threshold, my life has never been the same,” Brown said. “I got a sense of the spirit and that’s what I wanted. I couldn’t find peace with myself until I walked into that (Fremont) house.

Eddie wanted that peace after – as he recalls – being on the street for more than 25 years – six towns in four states, just “dealin’ and druggin’.” It came to an end in Minneapolis, Minnesota, where, one night in an alley off of Lake Street, he decided to go to Turning Point.. 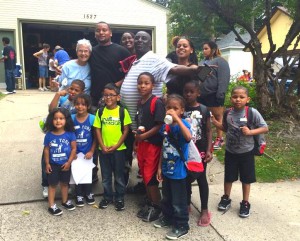 Eddie Brown with S. Katherine and neighborhood children at the Back-to-School Party.

“I had robbed a guy the night before and was smoking up the cash (cocaine), sitting there by myself,” he said. “It was like I heard my mother’s voice and I remembered this guy telling me about a treatment center. I had never heard the term before.

“I threw away my pipe and dope and started walking to the north side at 3 in the morning. I was sitting on the steps of Turning Point, waiting until they opened. A guy got out of his car, looked at me and said, “Are you ready to get clean?’”

He was.  He got off the merry-go-round, fueled by crack and chaos, and got on the wagon. He fell off once but came back and he’s been clean and sober for 27 years.

“Eddie’s a survivor,” said Bob Briscoe, a former Chicago cop and, like Brown, a long-time friend of the sisters. “Eddie’s a man of his word and I believe he wants to make a difference in this community. He’s there when the nuns call and he’s involved himself in several neighborhood projects.”

The most soulful project Eddie ever tackled was getting his friend Mona off the streets.   They did drugs together, struggled to find food and shelter together, shared hopes and dreams together.   When Eddie was at Turning Point, he had a dream about Mona.

“I found her and she couldn’t believe it was me because I was looking so good,” Brown said. “But she wasn’t ready to come in (to treatment). Three weeks later I got a call. “Do you really mean it?” she said. I told her yes and she went to a 90-day program in Anoka.”

Two recovering addicts put together one loving marriage – Eddie and Mona – and began their sober journey. The sisters helped with a down payment on their first house. And the sisters were there when Mona was diagnosed with uterine cancer. 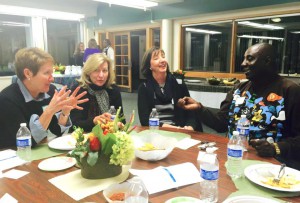 Eddie shares his story with friends at St. Patrick’s in Edina.

“She lived for eight years with the cancer,” Eddie said, “and I was with her all the way. I didn’t leave her side. Shortly before she died (in 2013), she looked at me with tears running down her cheeks, She said, “Baby, I’m goin’ home. I love you.’”

Brown struggled with Mona’s loss for more than two years. He’d set up a kind of shrine to her, with pictures and her ashes. Every day he’d talk to her. “Finally, one day I was saying a prayer and I believe God told me, ‘Eddie, I’ve got Mona now. You can let her go.’”

The shrine is gone. The memories linger. So do the lessons Eddie said he learned from the sisters.

“They’ve taught me something about loving, sharing, caring and giving back. I know I can always call them. Sister Mary Frances and I share a lot of stuff, sometimes in a conversation on the phone at night. I hope they know I will deny them nothing.”

Sister Mary Virginia Schmidt hopes Eddie knows of her regard for him. “He is kind of my ideal,” she said. “If he falls, he gets right back up. If he’s needed, he comes. When Mona needed, he was there. He really loved her.”

That fits the legacy that Eddie Brown wants: “That I helped my family and my community and, sometimes, helped bring them closer to the Lord.” Today, he’s raising Mona’s 9-year-old grandson, Abel.   He made a promise to her.

Tune into our YouTube Channel to see the video companion piece to this by Jim Shoop.

In my mind, this IS Eddie’s life and story, these words of Dave’s are not a “snow-job”. People ask me somethimes, “How has your life changed since you came to the northside?’ How? through folks like Eddie.” He is so ‘the real thing’; I admire him for the way he lives ‘outloud’ Salesian Spirituality. SK2

In my mind, this IS Eddie’s life and story, these words of Dave’s are not a “snow-job”. People ask me somethimes, “How has your life changed since you came to the northside?’ How? through folks like Eddie.” He is so ‘the real thing’; I admire him for the way he lives ‘outloud’ Salesian Spirituality. SK2