The Law of Hope: Our friend Dorice Law interviewed* 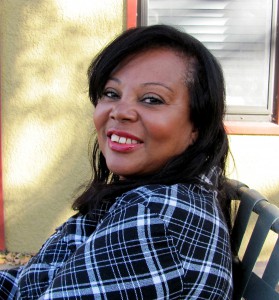 Dorice Law leads a life that’s taken her in different directions and destinations. The 60-year-old grandmother has an office in St. Louis Park, a job in Bloomington, a divinity degree from St. John’s in Collegeville, a home in Plymouth and friends on Facebook.

But her heart remains in North Minneapolis, among the friends at Visitation Monastery and the faithful at Ascension Church, where she first met the sisters as they were discerning what their future would be. “I approached them right outside the church,” Law recalled, “and I told them, “Well, Lord knows we need you right up here.”

Law was born in Chicago, the seventh of eight children. She moved to Minneapolis when she was 16 and graduated from North High School.   But she went to Catholic schools in Chicago and was nurtured by the women of the church.

“I grew up standing behind a nun’s big, black skirt and feeling safe and secure,” she said.   “That was the way the world looked to me.”

That confidence enabled Law to raise three children, go to college, earn two master’s degrees, teach in high school, recruit for a community college, run her own insurance agency and, now, serve as a chaplain to a senior-living facility in Bloomington. It’s the role she was made for: Chaplain, counselor, confidant.

“I am convinced that I am good at this because people need someone to pray with them – for them. Since I was a kid, I could pray at the drop of a hat.”

“My personality is to be honest and frank and I am that way with the people at Friendship Village (where she serves as chaplain).   I tell them it’s impossible to shock me, that they can tell me the truth. Everyone wants to be loved and understood.”

For those closer to the end than the beginning, Law has a message of hope. “I tell them all that is God is good. All that is bad is NOT God.”  Her spiritual work is about grace, forgiveness and trust in a loving God.

That doesn’t surprise the Visitation sisters. “Dorice was someone who welcomed us and kind of introduced us to North Minneapolis,” said Mary Frances Reis.   “From the very beginning, on a Sunday morning outside of church, I thought of her as transparent, honest, generous and genuine.”

That hasn’t changed in 26 years and neither has Law’s commitment to the nuns and their ministry.

“I had always made a commitment,” she said, “that anything and everything the nuns had going I’d be a part of. I think I was at their very first study group on the Virgin Mary. This is a place where you can be yourself, speak your mind and not worry about a kick-out.”

The sisters not only didn’t kick her out, they took her in – into the family. Law recalled she got dressed for her wedding in 1991 at the Fremont house. The marriage lasted eight years; the fealty to Visitation is everlasting.

Law’s always believed the nuns accepted her for who she is, how she is and as she is. She said it was the recommendation letter from Sister Mary Frances that facilitated her acceptance into the School of Theology at St. John’s.

Although Law doesn’t live in North Minneapolis any longer, two of her children and her sister do and she’s over there every Sunday morning for church. She’s aware of the neighborhood’s pride, promise and possibilities.    She’s also concerned about the guns, gangs, drugs and violence.

The legal system makes it difficult to change things, Law said. “Once the man is a felon, he is effectively separated from his family. You don’t rent a place where the father is a felon. And if you have a job not making enough to pay the rent, it’s hard to have any hope.”

Hope is what Dorice Law is all about.

To see a video of the interview with Dorice, visit our YouTube Channel.

by S. Suzanne Homeyer, VHM TRAVEL DOESN’T CHANGE MY DAILY PRAYER LIFE as much as one might think. I begin each day with prayer. As St. Jane de Chantal suggests: “Upon awakening in the morning, Read more…

S. Karen Reflects: An Irish Nun in this Month of March