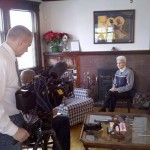 The Visitation Monastery on Fremont Avenue North in Minneapolis was abuzz with activity Monday. I arrived at 2pm to meet up with Sr. Katherine for our “Facebook date.” Sr. Katherine and I were going to work on our social media networking to further the vocations initiative of inviting “seven more visionary women to be a prayerful presence.” Little did we know what media would be employed for our socializing and networking purposes! Goodness.

When I arrived, the Vis Sisters’ neighbor, Sylvester McCoy, was emerging from the nuns’ garage, armed with a bag of rock salt. He was coming down the icy drive and slipped a bit on the way. I thought to myself:

“Who is this man?  How long have the nuns known him? Thank goodness he didn’t fall. Is he clearing all of the sidewalks for the Sisters? Do they pay him to work here?”

Sylvester and I sort of giggled a nervous, “hello” to one another as we passed each other on the sidewalk, both intentional about keeping our balance. “It’s slippery isn’t it?” Sylvester nodded, and went about his task of chipping ice and spreading salt;  I made my way into the back of the monastery. We both had work to do for the sisters.

I was greeted warmly at the kitchen door by Sr. Mary Margaret. As my spiritual director of seven years, I never tire of seeing this woman’s face. Her smile, and simple way of welcoming me, never cease to inspire me. I always feel like I belong there.  At 81, I marvel at Mary Marg’s energy and enthusiasm. I often have to remind myself she’s beyond retirement age;  she fuels a deep reverence in me for her wisdom and way of being in the world. I want to be like this woman. When I walk in this day, she was tuning into Sylvester through the kitchen window, mindful of his working presence, and commenting on his near fall. 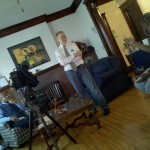 I realized in short order who Sylvester was to the nuns, and that this maintenance service of his was a gesture he discerned as a sort of “payment” for the sisters’ kindnesses over the years. I made a mental note, thanking God for this fellow, and the nuns’ network of friends; I held a space of gratitude for the relationships they’ve cultivated over the years, and the manner in which they seemed to be  in relationship with such a network of people in the neighborhood.  And then I was going about my business.

Sr. Katherine emerged from the basement all of a sudden, sort of flushed with news and excitement. “I’ve just gotten off the phone with Maury Glover from Fox 9 news. He wants to come over to do a story about the sisters!”

What ensued over the next several hours was this frenzied, flurry of activity — including reflection, story-telling and prayer with a diverse group of “Visitation community.” It was a time of friends showing up, strangers knocking at the door, a channel 9 reporter and cameraman coming in to document the sister’s lives, and a whole host of folks bearing witness to the wonder and work of the Visitation Sisters’ world and inspiring ministry and presence. In this time, (before the reporter and cameraman arrived), Sr. Katherine and I managed to update the Visitation Monastery North Minneapolis Fan Page on Facebook, accept about 36 new requests for friendship on Sr. Mullin’s  personal account, acknowledge the 140 new “fans” to the order,  and reflect on the “talking points” that our Vocations PR team had constructed. It was hilarious. It was inspiring. It was a fever pitch of activity that made me take note and marvel at how God and Spirit work in our midst. 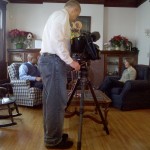 Sr. Joanna before the Fox 9 cameras

When Fox 9 reporter Maury Glover arrived and requested different people to interview for the story on the nuns, Sr. Katherine and her blessed counterparts were keen on gathering not just the sisters, but making sure members from the lay community were present. Sylvester was called in, Mary Frances invited longtime friend and neighborhood collaborator Will Wallace and his wife to the house. Artist Brother Mickey McGrath, OSFS, on retreat over at St. Jane house, came to check in on all the hullabaloo. The living room swelled with brown and pin-skinned bodies, snow boots and scarves, as well as the News crew team and equipment that sort of made everyone a bit giddy and self-conscious. Sister Mary Virginia, myself, Mrs. Wallace, and Brother Mickey squeezed onto a sofa while Sr. Joanna was interviewed, and yet another gentleman from the neighborhood pulled up a chair. Those convened ranged in age from early 30’s to mid-80’s. Some were Catholic, others protestant, others unidentified faith members – simply subscribing to the Vis Order of Love and Community. It was a motley crew assembled and present to tell the story of the sisters and acknowledge their vital role in the Old Highland Neighborhood of North Minneapolis. They were gathered and in agreement, “Yes, we love these women, and we’d like it if more would come!” 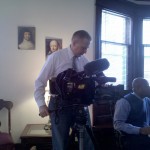 I sat back and marveled as the afternoon unfolded. I had arrived with an agenda to work with the sisters on our media campaign honoring and cultivating the larger community and networks visible in the virtual world. What occurred was something larger that made even more visible and tangible this network of relationships and work that the nuns do. I witnessed the emergence of community at the ground level.  I took note of the way the nuns pray. The way they love their neighbors. The way they are loved by their neighbors. The way this monastery works. It is what makes my spirit soar when I am around them and those they live in community with daily.

As Sylvester McCoy spoke to the Fox 9 reporter, I heard the voice of a vital member of this Visitation Community. I heard my own voice in a way. He was simply bearing witness to the way that these nuns are present in the neighborhood and inspire a kind of peace and stability. He was acknowledging his desire to be around them, to be a part of their community, and to give back;  he spoke about all he felt he has received from the Sisters.

When I left that afternoon, the sidewalks around Fremont House were clear, ice-free. The path: wide open. I couldn’t help but think: Sylvester is making way for these seven new Sisters to enter.  We are ready. We are welcoming seven new women to come and join this order and be a part of it all. Is one of these women you?

The following is the Fox 9 News story that aired on Monday evening. The sisters are incredibly grateful to journalist Maury Glover for his sensitivity in reporting on their mission, ministry and community,  and to cameraman Kent for the images of  all that he was able to capture. Check it out! Let us know your thoughts.

Melissa,
Your blog is so eloquently written. I am touched beyond measure. I believe the side walk is cleared and more will come. ~ Annette S.