The following post by Marsha West, Monastic Immersion Participant, was excerpted from her blog, “Marsha’s Musings.” Click here to read this in its entirety and see her photo documentation of life at Visitation Monastery north Minneapolis.

Saturday morning in the neighborhood-North Minneapolis 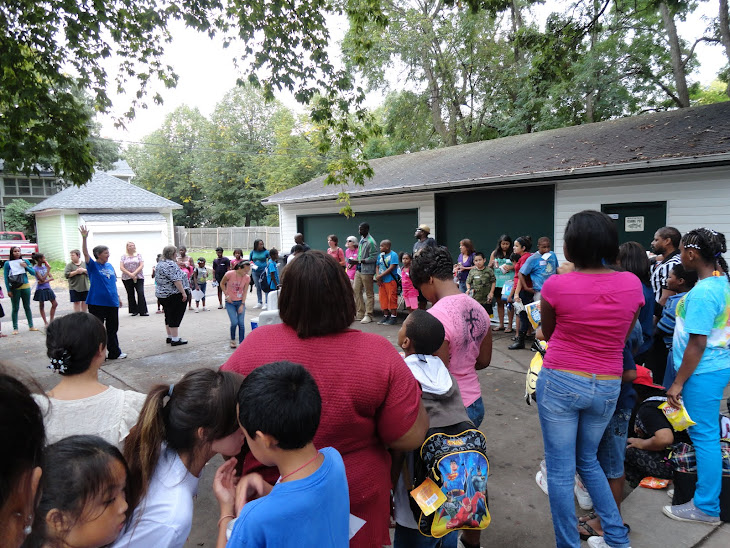 Sr. Mary Frances calls the group to prayer before starting distributing door prizes at the conclusion of our party.

Visitation Monastery follows a regular schedule: we gather together four times every day to pray the Divine Office. Morning prayer on weekdays is at 7. On Saturdays it’s at 8, and on Sundays 8:30. We either have a mass celebrated here at the Monastery or we go out to a neighboring parish. On Saturday mornings we generally have a Communion Service. Dinner is at 6:15. But in and around those regularly scheduled practices, all sorts of other things happen. THIS Saturday, August 25, was one such day!

So this Saturday morning, we gathered at 8, and several neighbors and friends joined us. We had a busy morning planned since the annual Back-to-School party was scheduled to begin at 1 PM.

But there was more! The Urban League sponsored a community parade which came down Girard Street where I am living. It was a great little community parade – with lots of young people from drum groups, dance companies, politicians leafleting the neighborhood as their supporters marched in their support. A couple of car clubs drove their cool cars, filled with family members and friends, past our house.