Peace on Plymouth: An Advent Response

In this season of Advent, of awe and wonder, we tune into this sacred and holy birth, marveling at God becoming one of us. It’s from this place of the Incarnation, buoyed by our faith, that we pray and act in solidarity, 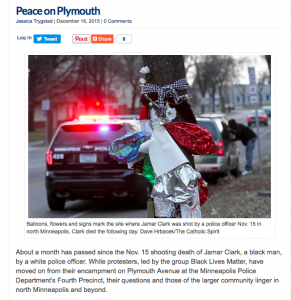 Click to read the article in The Catholic Spirit

in our unity and oneness.

This article in The Catholic Spirit highlights this faith that we are living in the face of the recent upheaval in north Minneapolis. Perhaps it will speak to you, in your own wonder, prayer, and unique call to act?

Click to read The Catholic Spirit article, Peace on Plymouth, by Jessica Trygstad. 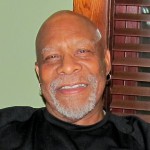 Bob Briscoe is a regular at the monthly, Monday-night Salesian Spirituality Meetings at the Visitation Monastery. He is one of a handful of men among a roomful of women and, along with his wife Khalilah, the former Chicago cop seems to fit right in with conversations about love, understanding and gentleness.

“We are companions on the journey, given to one another as helpers in doing God’s work.” — St. Jane de Chantal

“These monthly meetings lift my soul,” Briscoe said. “What is really good is to see the young people there, who are genuinely trying to help others in the community. That makes an old man feel good about the younger generation.”

The 73-year-old has nurtured his softer side but he is no pushover.  Briscoe defines what a good man is and what a good man does. He and his wife have been raising his 14-year-old grandson, Kameron, since his mother (Bob’s daughter Kontente) died. Briscoe and Khalilah have five grown daughters and two sons from previous marriages. 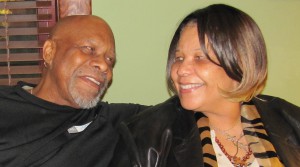 Bob and his wife Khalilah

The wisdom he’s imparting to Kameron includes some of those “little virtues” that are the basis of Salesian thought and spirit: patience, humility, honesty.

“I’m also trying to teach him the lessons that the sisters give to me,” Briscoe said. “I tell Kameron that you have to give back. And you can’t get discouraged in the bad or tough times. You can always give your troubles to God.”

Briscoe has known some tough times and good times in his life. He joined the National Guard after graduating from Corpus Christi High School in Chicago. After his discharge, he was a motorman on the “L” in Chicago. And in 1971 he was sworn in to the Chicago Police Department, working the streets for ten years as a patrolman.

He left the force in 1981 and spent several years as a construction laborer. He came to Minneapolis in 2006 and it was no accident that Bob discovered the Visitation sisters. He went to Catholic schools in Chicago and married Khalilah in Ascension Church in north Minneapolis.   That’s where he met Sister Mary Frances.

“She came right up and introduced herself to me,” he said. “And that was the beginning. Being around the sisters remind me of the first women in my life. They live those virtues they preach, right out in the community every day. And they do it for everyone they meet.” 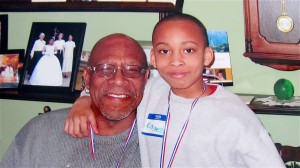 Briscoe’s also serving the community as a member of the Minneapolis Police Conduct Review Panel since 2012.  The panel investigates complaints of misconduct and brutality and makes recommendations to the chief. The former cop sees the issues from both sides of the badge and he passes that perspective along to Kameron. “Be polite. Do not resist. Do not run,” he said. “And call me as soon as possible.”

The Vis sisters appreciate Briscoe’s presence at their functions, and what he has done for them personally. “He fills his day with meaningful activities,” said Sister Karen Mohan. “He took me to chemotherapy (for breast cancer) a couple of times and sat with me.

“He is simply a willing spirit, ready to do anything. He’ll come to help us put labels on our newsletters.   And he’ll be a surrogate father to his grandson.”

For Briscoe, the gain for his soul is worth any pain to his body. “Kameron helps keep me young,” he said. “His curiosity, the questions he asks, always keep me looking for answers. I am always telling him to pray and that helps me to remember to pray.”

On the Virtue of Patience: From Vis Companion and Doula, Heidi Govednik

The following is an excerpt from Vis Companion Heidi Govenik’s recent blog post, “On Being A Doula”. We share this with her permission as part of our exploration of Salesian Virtues in our Second Monday Salesian Spirituality Series. Heidi spoke about patience in light of her work as a doula, or birth coach, at our Monday, October 14, 2013 evening at the monastery. We are grateful to highlight her inspiring thoughts and experience here.

Doula: The word “doula” comes from the ancient Greek meaning “a woman who serves” and is now used to refer to a trained and experienced professional who provides continuous physical, emotional and informational support to the mother before, during and just after birth; or who provides emotional and practical support during the postpartum period. (Definition taken from the DONA International website.)

“[As a doula, I’m learning] to submit to something larger than myself. I like to say I do this in my relationship with God on a regular basis, but the truth is I have a certain measure of control over my life that I daily choose to submit to God or cling to. ( I usually am doing the latter.) In birth, there is nothing you can do but be present to what is happening in labor and wait. I just wait. I watch. I am there, fully there…with no control but to choose to succumb to the steady, often slow, rhythm of labor. It is truly the only area of my life that I submit fully to patience and have no measure of control. What unfolds is incredible…every birth follows the same pattern somewhat like a song. Each is different, but follows the musical pattern of verse, chorus, verse, chorus, bridge….chorus…maybe a doxology in a hymn. Each birth is different, yet I usually can expect a the steady pattern of early labor, the intensity of contractions as active labor takes over, the peak of emotions and physical motion in the transition stage, and the overwhelming anticipation as the urge to push takes over. And then I know, without a doubt, that after all those hours of patience and the steady beat of a woman in labor, a baby will in fact come out. Just like that.

During a birth this winter I was sitting on a chair in the corner of a dark room, well into the night, watching the monitor steadily go up and down with each contraction as the mother slept deeply with her epidural. The labor had been long and I was coming into the awareness of the lack of control I have in being a doula, and how much patience I was learning in turning off the rest of my life for a time to be present during a birth. I was thinking how I fail so much at doing this in my faith: resting in God’s presence and His timing. I know He is unfailing in His love, and He is faithful to His children…so why can’t I trust that if I am submitting myself to Him that I can rest in His truth? I always try to make my own way, make my own plans and ask God to come along. In the process of birth, there is something so beautiful and so sacred when the baby comes out….whether it was 35 hours of labor or only 2, I know the labor needed to happen for the gift of life to come. I always am full of joy as I leave the hospital, knowing that the long hours were worth being able to witness the miracle of a little boy or a little girl emerge from a woman. I want to learn that same patience in my life submitted to Christ. His Kingdom is worth it. My prayer is that I can have the strength to surrender to labor in life, to dwell in the moments, and the grace to wait for the joys to come.”