Published by Anna Dourgarian on October 28, 2019 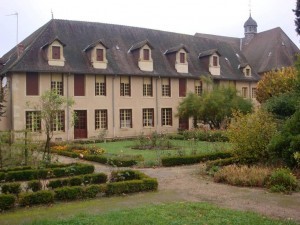 The Monastery at Paray-le-Monial

This past summer while on pilgrimage to France, I had the opportunity to visit the Visitation Monastery in Paray-le-Monial, France, home to St Margaret Mary. The Mother Superior welcomed us, recounting the visions of Margaret Mary. After she had shown us around, she invited me as a new Sister to enter the cloister part of the Monastery and go to the room where Margaret Mary had died. It is kept as a small oratorium today and as I entered I was deeply moved. I asked Mother Marie Simon if I could sit for a moment. I barely have words to describe what I felt, but I knew I had become deeply aware of suffering. I thought I was sensing the suffering Margaret Mary experienced in her life, but as I look back on it now, I cannot say that it was Margaret Mary’s suffering I was encountering. Perhaps she was carrying her mission to make the suffering Heart of Jesus known to me?! As I sat with that deep suffering, I felt another movement, one of compassion. In the midst of great suffering, there was also great compassion. Maybe, just maybe, I was experiencing a small echo of Margaret Mary’s exchange of hearts as she continues her mission to make the Heart of Jesus known to all.


We recently celebrated the Feast of St Margaret Mary on October 16. For the rest of the Catholic Church, this day is noted as an “optional memorial” but for Visitation Sisters around the world, this is a feast day. This year we also celebrated the beginning of a Year of Jubilee for Visitation Monasteries in honor of the 100th anniversary of the canonization of St Margaret Mary.

Margaret Mary Alacoque was born in 1647 and entered the Visitation Monastery in Paray-le-Monial, France, in 1671. Her early childhood is recounted as happy. Her father died when she was 8 years old and after that time she suffered much, with family dysfunction, physical illness, and mental illness interweaving themselves throughout her young life. Yet from an early age, Margaret Mary had a special devotion to Jesus. After she entered the monastery, she had a series of visions where she was in conversation with Jesus. Basically, Jesus said: