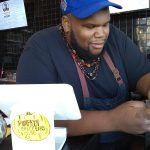 Sammy McDowell has been in the food business for most of his adult life, and he’s owned and operated Sammy’s Avenue Eatery at West Broadway Avenue and Emerson Avenue North since 2012. The Eatery is newly remodeled and reopened, and McDowell is hoping for a brisk business and profitable future.

But he also wants more from the restaurant. He wants a place where North Side neighbors can gather – to meet and eat, sit and talk, rest and enjoy life. He wants to make a contribution to the fabric of the neighborhood, and that’s what endears him to the Sisters of the Visitation.

“Sammy has a big heart and a gracious spirit,” says Sister Mary Frances Reis. “He’s got a vision of what this neighborhood could be. He knows people need a place to hang out and feel comfortable. And that’s what his restaurant has been all about.”

McDowell grew up in South Minneapolis but went to North High and graduated from Henry. He attended MCTC and then found his first job in the food business: eight years at Kentucky Fried Chicken, five more at Subway.

He learned how to run a business, and he knows how to put out good food. Just ask Will Wallace, who runs the North Four program for young men at Emerge; Wallace is in the business of turning kids from the street life to the good life, complete with training and a steady job. On a lot of days, he starts his morning at the Eatery with a breakfast sandwich.

Wallace and McDowell share a philosophy about what needs to happen to turn young men from gangs, guns, and drugs. “It’s all about education,” says McDowell, “about helping kids get out of a box. If you get educated, get a job, you can travel. You can make it out of the neighborhood. Some of these kids have never been out of North Minneapolis.”

McDowell hopes to add to the number of jobs (seven or eight) by opening a second eatery at Plymouth and Penn Avenues North. It will have the same format as Sammy’s on Broadway, with sit-down tables and a catering service, offering sandwiches, desserts, grilled meats, tuna and turkey melts, and garden salads. “I can do everything,” he says, “from sandwiches to brisket to catering big, fancy weddings.”

Sammy recalls meeting some of the Sisters shortly after the Broadway eatery opened. He says they held a few meetings at the restaurant and later gave gift certificates to some neighbors who came to their door with an empty stomach, in need of a good meal.

“Sammy offered this deal to us,” Sister Katherine Mullin recalls. “We would buy Sammy’s cards for five dollars to hand out to some of our better-known doorbell ringers. If the fellows went over five dollars, Sammy made up the difference. This is the kind of man he is.” 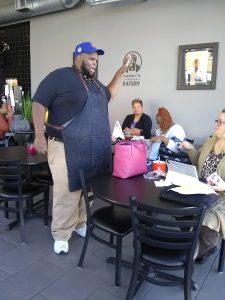 Of serving his guests at the Eatery, McDowell says, “I really want to infuse the neighborhood with great customer service.”

“I love the fact these women came over to introduce themselves,” he says. “The Sisters bring stability to the neighborhood. They are consistent in what they do. They are honest, and they are genuine. They’re a bridge between black and white.

“I guess what I’m saying is… they are doing their part.”

And Sammy McDowell is doing his part. “What I’m trying to do at the Eatery is to smile, to welcome, to help people if I can,” he says. “I want to stay in my lane, do what I do best.” That approach hasn’t changed over the years. Here’s what he told a reporter when he first opened the restaurant:

“I really want to infuse the neighborhood with great customer service. Even if you’re busy, it’s important to say hi and, ‘I’ll be right with you.’ People need to smile more, be happy to get up in the morning and get some coffee.”

When Sammy McDowell talks about “staying in his lane,” it’s hard to imagine that his lane doesn’t run down the middle of Broadway, and he admits he has a dream for the avenue. “I’d like my Broadway community to have more locally-run businesses. Some specialty shops, maybe even a tailor shop. You know, a place where people can look around, take their time, feel comfortable.”

McDowell says he’s thinking of keeping the Eatery open a little later at night to accommodate a few local musical groups, so folks could sit back and listen to some blues. The blues, breakfast, and brotherhood: they’re a good combination anywhere, and Sammy is trying to dial it up in North Minneapolis. The Sisters are not surprised: it’s in his nature.

* Dave Nimmer, journalist for the Minnesota Good Age magazine, is a frequent contributor to the Visitation blog, especially in his series of profiles of Visitation Companions and North Side neighbors. We hope you enjoy these stories of the blessed community that surrounds the monastery and sustains us in our ministry of mutuality.
LIVE + JESUS!
Categories: Uncategorized
Tags: Dave NimmerProfileSammy McDowellSammy's Avenue Eatery