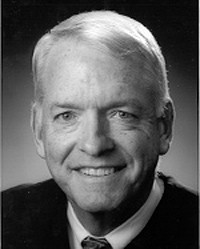 When John McShane was in his Hennepin District courtroom, he was known as Your Honor. When he’s at the Visitation Monastery in North Minneapolis, it’s more like Our Honor, a man whose wise counsel and manual labor have been solicited and treasured by the Sisters for three decades.

In fact, they have so appreciated his presence that they gave him their Cross of Affiliation, making Judge John McShane an honorary member of their Visitation Order.

His work with the Sisters stems from an expansive and eclectic life experience as a college grad, Army Lieutenant, Vietnam veteran, husband, father of three daughters, trial lawyer, district court judge, and law clerk to the legendary U.S. Judge Miles Lord. McShane credits Lord with demonstrating how NOT to be intimidated by the courtroom or the judges and lawyers who inhabit it. “The judge wanted me to know that I can do this job,” says McShane. “Miles believed both sides ought to be represented, but he had a special feeling for the underdog.”

John McShane’s special relationship with the Visitation goes back long before the Sisters arrived in North Minneapolis. McShane knew the Order from his school days in St. Louis, MO. His father was a physician who treated the St. Louis nuns. His sisters went to Visitation High School, and one was in the Visitation Monastery for 10 years. He once dated Sister Karen Mohan and recalls taking her to a May Day dance.

“We did dance the night away,” he says with a smile. Long after the dance and after McShane graduated from Notre Dame and St. Louis University School of Law, Sister Karen got in touch with him – this time in Minneapolis. She called to wish him Happy Birthday and to tell him that she and Sisters Mary Virginia Schmidt, Mary Margaret McKenzie, and Mary Frances Reis were about to start a new monastery on the North Side. 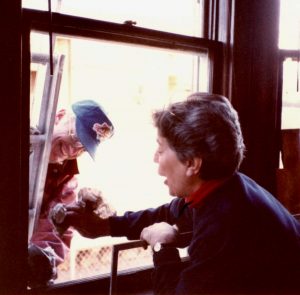 He’d been working and living in the Twin Cities, a partner in a prestigious law firm that specialized in product liability. As a trial lawyer, he was busy, but he found himself telling Sister Karen, “If there’s ever anything I can do….”

The judge made good on the offer for over 30 years, advising the Sisters on mortgages and contracts and helping their neighbors navigate the legal and government bureaucracies: finding the right person at the right time who had the right answer. He’s also swept floors, painted walls, and washed windows.

“That’s the wonderful thing about John,” says Sister Karen. “He didn’t just come over here as a lawyer and judge. He came over to roll up his sleeves and go to work. He’s been here to do what needed to be done at that moment.”

Working with the Sisters has not been a one-way street. District court judges quickly develop a realistic sense of the parameters of human behavior, especially if they’ve presided in civil, criminal, and juvenile cases, as McShane has. But, from the Sisters’ influence, he has developed an even deeper understanding of his community and of the breadth and scope of its human condition.

“I’ve been at Fremont and Girard when bishops have been there. I’ve also been there when those who are down-and-out come over,” McShane says. “The Sisters treat them all the same – with love, respect, and welcome. That’s a lesson for all of us.”

The judge is close to all the Sisters and says they’ve all helped him with “matters of faith. We can disagree, and sometimes we do. But I always come away feeling better.” That’s particularly true of his relationship with Sister Mary Margaret McKenzie. 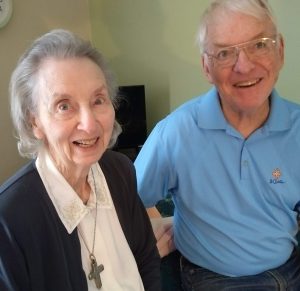 So is a good laugh. McShane recalls the end of one of his weekly visits when, saying goodbye to Margaret, he took her hand gently – or so he thought. She hollered, “Ow. Ow!” McShane quickly dropped her hand. What have I done to this poor woman? he wondered. Then she laughed. Gotcha.

“John grew into having a sense of humor that was defined by his family’s ability to laugh at self,” she says. “John mastered the appreciation of a good joke which he took care to keep clean and kind.”

Through the decades, the two have mastered a friendship that allows Sister Mary Margaret to confidently characterize his life with brevity, clarity, and honesty: “John,” she says, “cradles good with courage, but without knowing he is good.” She knows it, though, for she’s seen the life he’s lived.

* Dave Nimmer, journalist for the Minnesota Good Age magazine, is a frequent contributor to the Visitation blog, especially in his series of profiles of Visitation Companions and North Side neighbors. We hope you enjoy these stories of the blessed community that surrounds the monastery and sustains us in our ministry of mutuality.
LIVE + JESUS!
Categories: Uncategorized
Tags: Dave NimmerJohn McShaneProfile