Stranger in a Foreign Land

Published by Anna Dourgarian on January 16, 2018 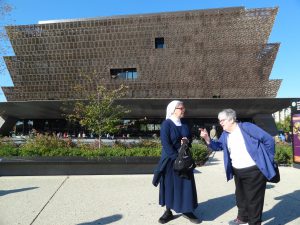 I must admit that every time I go to our nation’s capital I do feel like a tourist…probably because even though I have been to Washington, DC, over two dozen times, there is always something new to see. Most of my visits have been a day or two or even only a few hours after a meeting and before catching a plane.  This year’s “must see” is the Smithsonian’s National Museum of African American History and Culture.  Just a stone’s throw from the Washington Monument on the Mall, it catches the eye of passers-by.  I heard many ask “What is THAT supposed to be?” as they see the three-storied silhouette of a corona representing faith, hope, and resiliency.

Guides directed us to elevators and escalators (there are 4 additional stores below ground level) and suggested we take the elevator to begin our journey.  As we descended we went back in time…exiting in the midst of the 1400’s Transatlantic Slave Trade.  I was beginning to feel like a stranger in a foreign land. As I moved past the horrors facing black brothers and sisters in colonial America, some things came back to me from history books. I realized the Revolutionary and Civil Wars had been taught to me from an all-white American perspective. Was this a fair deal for any American? Economics and the cotton industry governed the life of enslaved workers who often picked cotton from sunrise to sunset, and since cotton was such a sought-after commodity to make durable clothing for those who could afford it, often those who picked the raw material could not afford to purchase the finished product. Such economic enslavement was just the first of many surprises the Museum held for me. 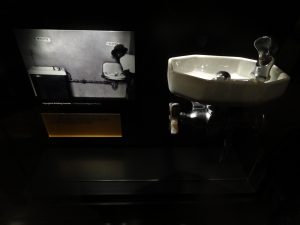 Emotionally, I struggled past stories of people I “knew” better like Thomas Jefferson, Phyllis Wheatley, Frederick Douglas, Abraham Lincoln, Harriet Beecher Stowe, Nat Turner, and Harriet Tubman.  The era of segregated railroad cars and lunch counters as well as Jim Crow featured a moving memorial to Emmett Till and one of the airplanes of the Tuskegee Airmen.  I was getting closer to home since one of our neighbor’s uncles was an airman.

Marching on through the museum with the Movement, I found myself in MY era: the 60’s, with its huge protests, student marches, and prejudice of every kind.  The memories of war, black classmates, and Kent State flooded my mind.  I stopped into a sound booth that invited museum goers to leave our own stories for future museum goers.  With an audience of another senior citizen in the room, I shared about a college roommate who was African American from Tuscaloosa, Alabama. She was an art major and quite interesting. She was a good student but never went to the library to study with me after supper.  She often asked me to bring back a book for her or to Xerox a particular required reading assignment that was on reserve. She told me she never went out after dark.  In her town, she lived with a curfew and even her father came home from his job as a cab driver by 6 o’clock!  I found this unbelievable.  This was the first time I’d heard of “sundown laws.”  Growing up in Chicago and educated in Iowa, these were foreign concepts. My recorded story stopped at this point but the woman in the booth with me told me she liked hearing my story. We visited, and I processed my own hearing of my story.

She was an educator from Atlanta, and as we talked I realized my roommate had been a victim of systemic racism.  The existence of “sundown laws” not only prevented her from studying in a college library, they had prevented her father from earning a good living for his family because he was not allowed to drive his cab after dark when there were higher fares charged and perhaps more people out for a “night on the town.”  My own life has been touched by systemic racism that shows itself in the economic, political, and educational facets of American life.

by Sr. Karen Mohan, VHM When my youngest sister, Colleen, e-mailed me this photo a few days ago, she didn’t know that she was sending it during a week designated as “National Catholic Sisters Week,” Read more…

The Dollhouse in the Chapel

At Girard House, if you take the back stairs (the “servant stairs,” in the old days) from the kitchen to the second floor, you find yourself in a small alcove with chairs in a half-circle Read more…