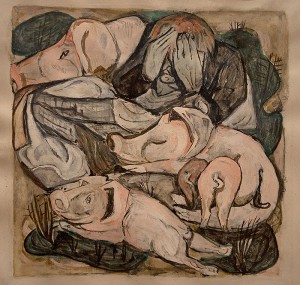 The Prodigal Son Among Swine – by Max Beckmann

He’s standing in the mud, knee-deep in animal excrement when his conversion takes place.

The story of the prodigal son is a familiar one of forgiveness, redemption, and mercy that Christ offers as a way to illustrate his invitation to the tax collectors, prostitutes and murderers, and say, “all are welcome at my table.”*

My way into this often-shared Gospel narrative is through the pig-pen of the prodigal son’s redemption.

I can see the younger son of the wealthy man. He has left his father’s care and squandered his inheritance. His fine clothes are now tattered after his journey to the bar — perhaps the brothel, and his hunger has taken hold. He is envious even of the pig’s meal of corn husks and vegetable skins.

I imagine the smells of that live stock yard, the waft of animal feces mingled with recent rain or warmed by sunshine. And there the son stands, utterly forlorn and contemplating the lunch of the lowly pig. As this creature of God feasts on the dregs poured into the animal’s trough, the wayward son finds himself in this humbled stance, and desiring the least of the pig’s meal. A corn husk, please?

He knows what he must do. He comes to know the grace of God and his own goodness in taking his hungry self back to his father.  And the tale of love and mercy and a father’s generosity and forgiveness unfolds.

As I listen to this gospel reading sitting in the Fremont Avenue House of the Visitation Monastery, I find my way into the story through the door of the mud-covered man who is the forsaken and forgiven sinner;

I think of all those welcomed to the table of the Visitation Sisters. 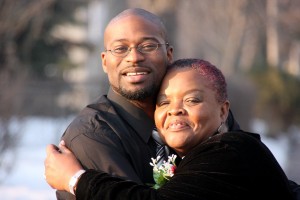 Oshea Isreal comes to mind as the name of one such prodigal son who has dined at the Monastery in north Minneapolis with the Visitation community.  Oshea, who at 16 took a gun to a party and shot and killed the only son of Mary Johnson. Oshea, who at 18, 20, 22, 24, was invited to meet this mother of his murder victim, and be forgiven.

He picked up a gun and took another man’s life. He served half of his life in prison. And in some way, has  come to understand himself as more than his worst act.  Mary has forgiven him. And perhaps even greater: he has forgiven himself.  He has received this forgiveness.

It’s the pig pen and livestock yard that makes this such a radical story of redemption for me this Lent. Because I imagine not only the amazing grace claimed by the prodigal son, the Oshea Isreals of this world, who are invited to dinner, but of my own messy, in-the-mire self.

How have we stood in the muck of disgrace? Of poor behavior? How have we been leveled by an action that brought on our lowest stance? How have we known the dregs of shame?

And in the same breath, then, how have we known forgiveness? God’s love for us?

When we claim this grace, this mercy  afforded by God, we allow ourselves to be welcomed to the table, to dine fully with Christ and Love’s companions. We are counted.

“This man welcomes sinners and eats with them.”

by Sr. Karen Mohan, VHM When my youngest sister, Colleen, e-mailed me this photo a few days ago, she didn’t know that she was sending it during a week designated as “National Catholic Sisters Week,” Read more…

The Dollhouse in the Chapel

At Girard House, if you take the back stairs (the “servant stairs,” in the old days) from the kitchen to the second floor, you find yourself in a small alcove with chairs in a half-circle Read more…