“Acts of the Apostles” Narrative: Jesus and the Prison Angel 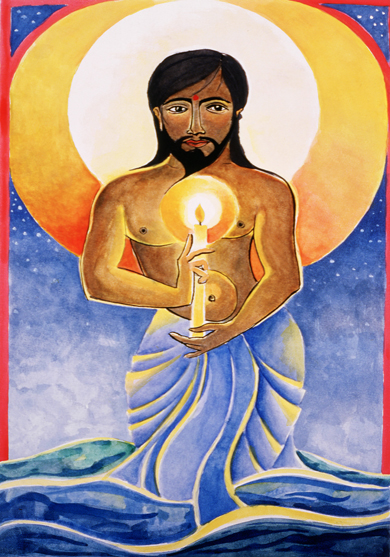 "Jesus: Light of the World" by Br. Mickey McGrath, OSFS

The Easter season has come to an end, but resurrection stories continue to stir our hearts.

What Easter story have you experienced?  What life-tale needs to be blessed by the outpouring of the Spirit this Pentecost?   I heard a contemporary Acts of the Apostles narrative, full of all the drama of the  early Church, that I want to share you with as we all prepare to celebrate the Holy Spirit’s “wind and fire” among us on Pentecost Sunday, June 12.

It was Holy Week when we were first asked to pray for “Jesus,” one of our Spanish-speaking parishioners at Church of the Ascension in north Minneapolis. Jesus had been taken into police custody when a situation showed that his immigration papers were not in order. Jesus, our immigrant friend, was due to appear before the judge during Easter week.

The Sisters all prayed for a “just” hearing for Jesus; we were surprised and grateful that Jesus himself  came with his family to our Wednesday morning Mass to share the outcome of his plight.

The day of Jesus and his family’s visit to our monastery coincided with the daily Scripture from the Acts of the Apostles describing how Peter and other disciples were miraculously freed from their prison chains and led forth  “by an angel” to freedom (Acts 5:17-26).  Sr. Virginia was translating this text for Jesus, and as he heard it, his face radiated awe and joy, for the Word reflected his recent experience!  With Sr. Virginia’s help, Jesus gave us the details:

When he was taken into custody, Jesus was very afraid and felt totally alone in this cell although he was with several other men.  He feared being deported; he feared the language barrier; he feared that he wouldn’t be able to take care of his wife and son, and he had no means of paying the $10,000 bail.  He had a paralyzing fear.  Jesus had faith, but it was wavering.

Shortly after this, Jesus was put in another cell; this time he was with just one other person: a very large African American man with tattoos showing everywhere.  Jesus’ fear escalated!  His fellow inmate asked him, “Do you believe in Jesus?”   Jesus nodded.   “Then why are you afraid?  Jesus will help you.   Do you want to SEE Jesus?”   Perplexed, Jesus didn’t know how to answer.  The inmate repeated the question, only louder.  Jesus again nodded “yes.”   At that, the other man unbuttoned his shirt to show a huge tattoo with the word, “JESUS” written on his chest!  The two men broke into a broad smile!  Jesus was being shown JESUS!  From that time on, Jesus was not afraid! The two men prayed, and a while later, Jesus received the news that his friends from Ascension had collected the bail money.  Jesus could be released.

But during the night, the angel of the Lord opened the doors of the prison, led them out, and said,“Go and take your place in the temple area, and tell the people everything about this life.” – Acts 5: 19-20

That inmate wearing a tattoo with JESUS written across his chest acted like the “prison angel” of the early Church when Peter and the other apostles were led to freedom.  After this experience, Jesus, our immigrant friend, said that his fear was released and replaced by a strong sense of the Risen Christ upholding him.

May it be so for Jesus and his family, and for all of us.  May our hearts be stirred and readied to receive the Holy Spirit’s outpouring.  Then may we run with the life-freeing message of Jesus Christ!