The Real Thrill is not the Ride, but the People. 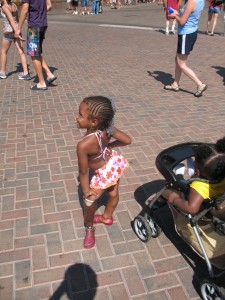 “Rayonna lost her leg when there was no way to save her deformed foot and knee at birth.   From this she now wears an amputated device. The amazing thing is that when Shriner’s Hospital staff brought gifts from their giving tree at Christmas to the Visitation Monastery, Rayonna’s grandma told the story of her infant grandbaby. Shriner’s offered to take care of the child GRATIS. Rayonna is now 3 years old and she totally enjoyed Valley Fair with us! She is from Omaha, and she comes every few months to Shriner’s hospital for adjustments and needed medical support as she grows…..a real miracle story that took place at Visitation!”

Miracles such as bringing people together who need one another are not a rare thing at the Visitation Monastery. The story of Rayonna is particularly close to my heart as my oldest Finn, was born with a club foot and needed lots of medical support beginning at seven days old. We lived in California at the time and were introduced and blessed with amazing doctors and resources nearby. But I can still remember when I went in for my 20 week ultrasound and they told me he had a deviated ankle and foot my heart plummeted. Like Rayonna’s grandmother I wanted him to be able to enjoy life to the fullest, and I needed others to help me help him through this. Like Rayonna’s grandmother I too turned to the Sisters of the Visitation and others for their prayers. And like Rayonna, Finn is also thriving and I have a hunch would love a trip to Valley Fair some day!

Elizabeth Eilers Sullivan is a 1993 graduate of the Mendota Heights Visitation; she currently resides in Santa Fe, New Mexico, with her husband and three sons. She is a freelance writer who is passionate about motherhood and sharing Salesian Spirituality . We are happy to feature her here as a guest blogger from time to time.

dear beth,
thanks for putting this good news story about rayonna on the blog…..it is one of those stories of how bridging takes place between people we know all the time just because good people are involved with us and god chooses these situations to make big differences in people’s lives…..i hadn’t seen rayonna for over a year and to see her running around the neighborhood trying to beat her older siblings to the next piece of trash to pick up was too much. the trash pick up was the way our valley fair guests gave back to the neighborhood for the super fun family day at valley fair….no moss growing under this one’s foot (artificial or natural!)
sr. suzanne

I really like how you could relate to Rayonna’s story because of your experience with Finn. I did not know this little fact about your oldest son. So thanks for making that connection and putting it out there for us. SKatherine

dear Sr Suzanne and Sr Katherine, thanks for your comments about bridging and connecting. I love how you have seen and supported Rayonna in her growth! And, yes, her story is close to my heart. Thank you for filling it in even more!
Love!

The Crossroads of Suffering and Hope

by Sister Karen Mohan on December 5, 2020 As our community enters into our last Advent/Christmas season at Fremont and Girard, we chose as our Advent theme: “Our Graced Crossroads: the Intersection of Suffering and Read more…

A Tribute to Sr. Mary Margaret

by Sr. Brenda Lisenby on October 11, 2020 “You will be the sunrise.” These were the words that Jesus spoke to Sr. Mary Margaret one morning as she was at prayer and watching the sunrise. Read more…